Greyhounds are quite different from other dogs, and have some of the characteristics of the cat.  This comes from their powerful prey drive, although if your greyhound was rejected for not having the instinct to chase the lure, chances are he may be cat friendly and not too interested in chasing things. Our two greyhound boys get along with cats just fine and we have 5 cats, 3 inside and 2 outside. A greyhounds distance vision is phenomenal, and they will stare intently into the distance in the same way a cat does.

Most often it’s in your home where the pet Greyhound comes into its own, in this setting they can easily act the clown, which is so endearing!  When they are new to living in a house, greyhounds can be easily spooked by things such as a vacuum cleaner, or a loud television.  Having been penned up and institutionalized for months or years, in their new home they often go into a second puppyhood, playing, collecting toys, bones or anything that takes their fancy, and surrounding themselves with these fabulous new things!  Like any dog, it is vital you keep real valuables out of their reach, and don’t leave food lying about at nose height either.  Always treasure these early puppyish moments as they may or may not not last.

A fit rescue greyhound will have solid, rippling muscles and an elegant, sleek physique.  When racing, they are often kept a few pounds underweight, so they will usually show a lot of rib.  The pet greyhound usually gains a few pounds, but very rarely will the dog become fat, they seem to self-regulate the amount of food they need. Vladimir & Vitali, our two boys are now 2 years old and every trip to the dog park people are amazed at their musculature, they never fail to get lots of attention. 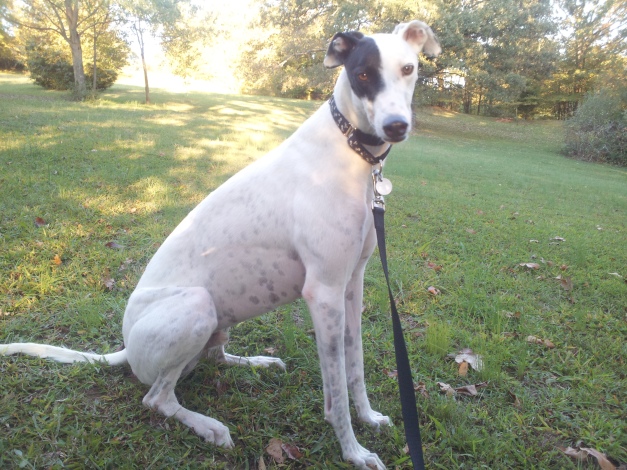 If you adopt an ex-racer, you may be a little surprised the first six months or so. Many are traumatized when they find their “forever home” and just can’t believe their luck! Typically, the new dog is nervous and frightened by your desire to give him a hug as it seems unnatural to him, he may look for an escape route.

Some people unintentionally pass on false information detailing the greyhound as a “frightened of their own shadow” type dog, and to some extent, it may appear so… but the abuse that some of them have gone through is unimaginable for us pet greyhound owners and their bravery and resilience in the face of such horrible treatment is truly humbling.

There are actually so many physiological differences between Greyhounds and other breeds of dog, they may as well be regarded as a totally different species.  Among some of these differences are bigger hearts, their red blood corpuscles more numerous, all commensurate with the highly-tuned sprint athletes they are.

Many greyhounds love to run, especially the younger ones, whether they had a successful racing career or not,  others rarely run, preferring to lope around and sniff the ground, even when let off the leash.   (Please only let off leash in a secure, safe fenced in area) Whichever type, these dogs are amazing athletes and if they do choose to treat you to a show of what they are capable of, it is an amazing and beautiful sight

Most people who’ve had a Greyhound say they’d never change breeds.  There’s just something inherently magical about the dignity and warm personality of the Greyhound that sets it apart from all other breeds.