Reminds me of a song, “The Needlenose and The Damage Done” or something like that, pardon me Neil Young 😉

As many of you well know, greyhounds can have their own particular group of phobias, not the least being fear of thunderstorms. This is a particularly devastating phobia for greyhounds as they typically tremble and whine, seek comfort from their owners, and many engage in strenuous efforts to escape from where they are confined, which can lead to frenzied scratching, chewing and digging. Not only can the dog’s surroundings be damaged and the dog escape from a safely confined area, but some affected dogs will scratch and chew with such unending force that their muzzles and feet become injured and bloody. With all that being said, our soon to be 3 year old rescued greyhound Vladimir suffers from storm phobia, but he does not seek anyone out for comfort, typically he will stand off to himself, mouth wide open, breathing heavily and pace around. That has not been much of a bother, (although it is very hard on him) until last night.

We were gone to our sons karate practice and while gone we heard about the storm warnings, but thought they were going to bypass our area. Ok, starting to see where I’m going with this?  Our two furboys, Vladimir & Vitali were home alone and I imagine when the thunder started Vlad started to pace and walk around and in that process walked into our son Chance’s room. Chance had been in a hurry and left his door ajar and once the boys pushed in through the door, the door got closed behind them and most likely in their efforts to get back out, they only succeeded in shutting the door completely. That was not good.

I can  imagine how terrified Vlad must have been in that small room, no way to get out, the thunder booming and what we saw when we got home was evidence of a poor soul that was in complete desperation mode. I’ll post some pics for you to see the damage done, thankfully neither of the boys showed any signs of injury and Vitali was just along for the ride as it was Vlad who has the issues and was the only one with wallboard in his teeth! It was a mess, but he accomplished his goal to get out of that room.

We have learned a lesson to pay more attention to the weather before we go off and leave our furboys home alone again. 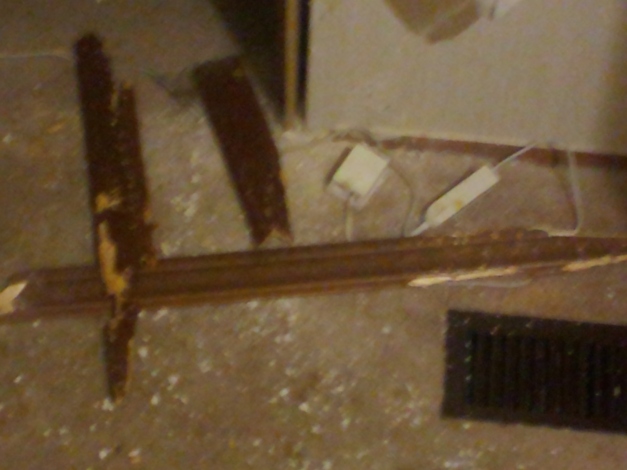