Greyhound Racing – From Nobility To Slavery

The Difference Between Greyhound Racing’s
Propaganda and Reality is like:
NIGHT AND DAY

1) Greyhound racing is a humane, fun and harmless sport.

2) Racing greyhounds are prized athletes that receive the best of care. We treat our greyhounds better than most people treat their pets.

3) Cases of abuse and killing of racing greyhounds are rare isolated incidents.

4) Critics of the dog racing industry are wacko animal rights extremists who are opposed to the use of animals for any purpose.

6) We would not have to euthanize greyhounds if more people would adopt them.

7) Racing greyhounds would not run if they were not well cared for.

8) Greyhound racing is a highly regulated sport with high standards of animal care.

3) Over the last two decades, hundreds of cases of abuse have been documented including greyhounds that were shot, starved, electrocuted and sold for research. Industry insiders report that this is only the tip of the iceberg.

4) This statement is merely a public relations ploy designed to marginalize industry critics. The killing and abuse of greyhounds is a mainstream issue that has been taken to heart by the American public. Opposition to industry practices has been publicly stated in newspaper editorials, by government officials and mainstream animal welfare organizations.

5) Humane Societies do not breed dogs; make money off of them; kill them. Then repeat the cycle.

6) It is not the responsibility of private charities like adoption organizations or the American public to white wash the image of the dog racing industry.

7) Running is instinctual for greyhounds. In fact, it is not uncommon for a greyhound to finish a race in spite of having suffered a serious injury.

8) In most states, dog racing regulations are essentially concerned with gambling rules; breeding and training farm operations are virtually unregulated.

Where Do All Those Puppies Go..

Many greyhound puppies and youngsters are judged to be of inferior racing quality at birth or during the farm training process. Many owners elect not to continue investing in dogs that demonstrate little potential of making money; the vast majority of those dogs are destroyed on the farm before they ever start a racing career. In recent years the yearly disappearance of thousands of puppies is explained away by the industry spokesperson as death from “natural causes”. However, this same spokesperson admitted in an interview that puppies were, in fact, destroyed on the farms. Industry insiders confirm that large numbers of pups are destroyed. Young greyhounds that do show promise are individually registered and named before going to a track at about 18 months.

In the tenth century, King Howel of Wales declared that the penalty for killing a greyhound was the same as that of killing a person, death. In the days of the Egyptians, greyhounds were valued by the pharaohs for their grace, beauty and mild temperament. But in the 21st century, greyhounds in the racing world are prized for only one thing…speed. Every year thousands of greyhounds are killed in various inhumane ways simply because they are not fast enough.

It’s an industry that exists solely for the entertainment of humans at the cost of animal lives.

Because greyhound racing has little to do with dogs and everything to do with money, scant regard is given to the humane treatment of the greyhounds. This is an industry that places profits above the health and welfare of greyhounds, how else would you explain the culling of unwanted dogs, a general disregard toward animal injury, and the inhumane living conditions that the majority of the dogs endure?

Greyhounds are at a disadvantage even before they are born. Tens of thousands of greyhounds are bred annually, many more than are needed to race, in an attempt to create the fastest dogs. The greyhounds are then “weeded out “killed” if they are at any time determined unable to become racetrack stars.

“From the time they are born, they are judged for their racing ability,” says Laura Bevan, director of the Southeast Regional Office of The HSUS. “As puppies they may be killed, or culled, if they don’t have potential to be good racers. After that, any injury or slow down of speed can mean death. The dogs are a commercial product, and once it is determined that they don’t have value as a racer at a track, their days are numbered.”

Throughout their racing career, the dogs routinely endure inhumane conditions and have little human contact. Many greyhound farms are barely getting by financially, so the dogs are kept caged most of the time and fed low quality foods. Each dog is a major expense, which is why so many are killed in various, inhumane, ways when they are deemed unfit to race.

Please consider adopting a greyhound. So many are waiting for someone like you and me to save their lives. And if adoption is not an option for you right now, they are always in need of people who are willing to foster. In fact, there are many ways you can help, so please do. Join the fight to stop  the racing and subsequent killing of these precious greyhounds. 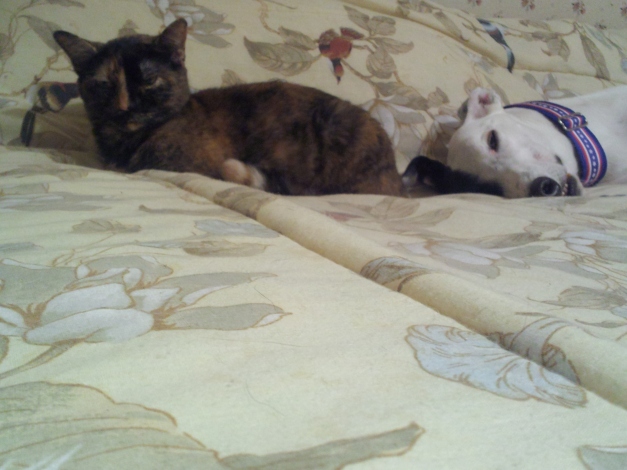 One comment on “Greyhound Racing – From Nobility To Slavery”